There are two ways to reach Skiadi:

Walk from the church of St. Efstathios at the north exit of Chorio, to the St Athanassios one to have a nice view to the terraces, or follow the downhill path to the old stone bridge at Panoklima seasonal flow.

(The texts and maps that will follow come from an environmental project of high school students from Kimolos.)

Why should I go walking?

The walks suggested will allow you to visit  the whole island and to visit places which cannot be reached by car and, walking at your own pace, you will be able to see the island in close-up.

The routes are suitable for average walkers and the highest you will climb is 350m. You will need solid footwear, as the paths are stony and sometimes rough.

What season is best for walking on Kimolos?

Each season has its charm, but the best time to walk on the island is the spring. The hills are bright green and covered with every colour of  flower. In  summer, you should set out early, so as to walk before the hottest part of the day, when the best place to be is on the beach.

What should I take with me?

Plenty of  water and something to eat. Wear comfortable long trousers and walking boots. AVOID  SHOES WHICH DON’T COVER YOUR WHOLE FOOT and of course take a hat and sun tan oil. Don’t forget the walking guide, even if on Kimolos, almost everywhere there are people to ask the way from if  you are lost.

If it is summertime,  don’t forget to take your swimsuit because all the routes lead to fine beaches. At the end of each walk, except for the first, you can return by water taxi or fishing boat (“kaiki”), as long as you have arranged it in advance. You should confirm on the day that the weather will allow the trip.  You won’t have to walk back the same way and you will be able to see the magnificent coastal  scenery of the two islands.

Select one of the following routes
(Text and photos: Kimolos Highschool Environmental Team) 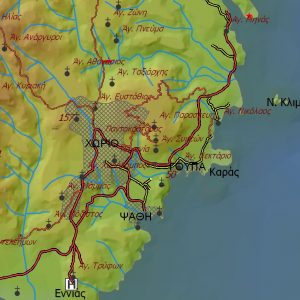 more
Close
Start from the central square of Horio and walk  in the direction of Psathi. At the baker’s,  take the left fork and just after you pass the Farmers’ Association building,  turn left, following the orange arrows. From here to the top of the hill the paved path is one of the most beautiful in the island, maintained in  excellent condition. Shortly  before you reach the top, turn right  to visit the chapel of Pantokratoras. The chapel itself is usually  closed, but  the  spectacular view of the east coast and  Polyaigos will reward you for your effort.

Continue along  to the derelict windmills. This region is named Xaplovouni, which is thought to be a corruption of  the word Klapsovouni, the hill of tears, since, according to tradition,  sailors’wives  went there to look for the boats returning and cry, longing for their men. As it is evident from the many threshing floors and half-ruined windmills, in the past this area was the scene of  constant busy activity.

If you do not have enough time, from the windmills you can go down to the other side of Horio. If you wish  to  continue,  turn right and  proceed along the stone wall  in the same direction, with the quarries  of  Prasssa in the distance. After 300m, you start to go down towards the petrol station. The road, which in winter turns into a stream, is not in the best condition, as it is not used anymore.

Cross the road and you come to Ag. Nikolaos. Continue along the coast to the south, first on a path and then on a dirt-road leading to  Horio. If you are not too tired,  we suggest you cut off to the left a little before  Ag. Nektarios, and go down to the sea (a swim would be an excellent idea) and then continue along the coast through the picturesque houses and past the boat-house caves of Goupa. You can return  from the main road. 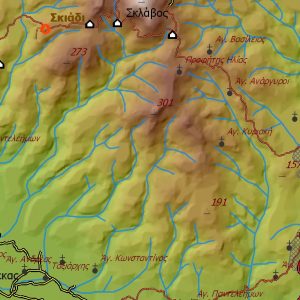 more
Close
The departure point is the OTE building. Heading out of the village, you turn left shortly before the church of Ag. Efstathios following the blue arrows. The first hour of this walk is the same as the walk to Paleokastro (indicated by the red arrows). As you are leaving the village, take the right hand road at the first fork and where the road ends, turn left. Don’t take any of the smaller paths which cross your route but keep on the wide,  mostly well-paved track.

Roughly half an hour after you pass the chapel of Ag. Anargiri, you’ll see a little further on, away from the track on your left, the chapel of the Profitis Elias. Roughly 45-50 minutes  from Horio,  you go left, still  following  the blue and red arrows. Alternatively, you can reach this point by motorcycle – up to here the track is reasonably negotiable.

The path, which starts to narrow, continues along the slope – on your right is Mount Sklavos (you will see the radio transmitting dish  on the summit). Leaving  the mountain behind,  you will reach a point where two paths  diverge. For Skiadi you continue straight on, following the blue arrows while for Paleokastro you turn right. Starting your way down, you can  see Skiadi, even if the path is not very clear. Skiadi itself is a remarkable geological formation – a rock, perhaps three metres high and three or four metres wide, sculpted by the wind into the form of a mushroom.

If you want to continue towards the sea from  Skiadi, head down the steep slope into the deep valley on your right (90 to your previous course). The path is difficult to find, and you may have to make your way through the low scrub vegetation. Once you reach the valley bottom ( about 10 minutes), however, you will again find a good wide track on your left following  a stone wall. Follow the track in the direction of the sea and it will lead you to Mavrospilia beach. 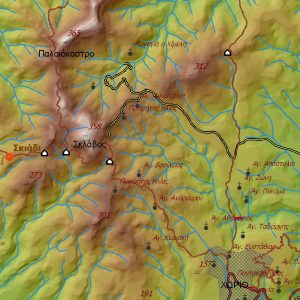 more
Close
From Horio follow the path towards Skiadi, as in route 2. When you reach the point where the two paths divide,  turn right, following the red arrows and continuing with  Mount Sklavos still on your right . This path has an impressive view of the rocky west coast of the island. Directly north of Mount Sklavos, which is the highest point of the island, is Paleokastro. The path passes Paleokastro to the west and does not continue up to the top of the mountain. For those who  want to enjoy a panoramic view of the Aegean, the ascent is easier from the eastern side.

From this point you can return or go on  to Agioklima beach. The path goes gradually down until you reach a hut and a stone threshing floor. Immediately beneath you is Agioklima bay, with its two small beaches. Unfortunately, for the last 200 metres the path disappears, but the descent is not dangerous. 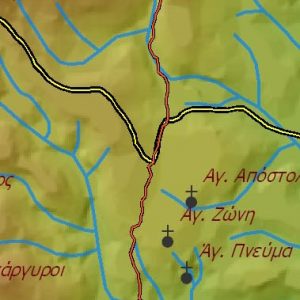 more
Close
From Horio the path to Monasteria, marked with  red arrows, goes in a straight line due north. Take the road which leaves Horio to the north (the continuation of the main street).  At the exit from the village the road forks to either side of Ag. Efstathios (a distinctive church, painted in a grey and white pattern). Take the right fork and follow the paved lane downhill into the valley, to the only stone bridge on Kimolos.  Don’t cross the bridge , but take the left fork, climbing up the hill and leaving the chapels of  Ag. Pnevma and Ag. Zoni on your right.

After about 1 km, you come to a dirt-road. Turn right onto this road and follow it downhill for  roughly 400 metres to where the dirt-road bends to the right. Turn left onto  a smaller track, heading for the beehives  on the hillside in the distance. After two or three hundred yards a smaller path leaves the track, at an acute angle, on the right hand side and bears away uphill.  Follow this path up the right-hand side of the valley, heading for the pass to the right of the high mountain and the abandoned huts at the top.

Before you start to descend, you should pause and enjoy the view of Monasteria, while opposite you , you can see, from west to east, the islands of  Serifos,  Antiparos,  and Sifnos.  The path down to the beach is very clear, following the right-hand side of the valley. Take care as you descend, as in places the path has been destroyed by rain. The chapel is dedicated to Virgin Mary, whose festival is celebrated on the 15th. August.

To reach Soufi, cross the beach and at the end turn left and then immediately right. In  Soufi, you will find shade while the place is ideal for a swim as it is protected from the wind  whatever the weather. 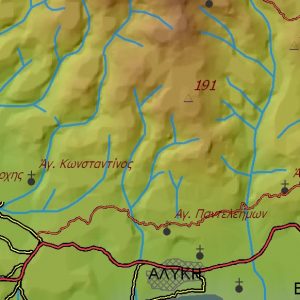 more
Close
Starting at the church of  Ag. Haralampos, you set off along the asphalt road that leads to the port.  Take the second turning on the right and immediately afterwards turn left, following  the brown arrows. The route  follows a paved path that in places has been replaced by a dirt road, with splendid views of the beaches in the south of the island.

It’s well worth stopping to see the chapel of Ag. Panteleimonas and to admire the landscape. Roughly 600 metres further on, the path bears to the left and you come to the asphalt road. Turn right  and at the second bend before the road begins to go uphill, you turn left onto the next path. Continue until you reach Dekas beach. Beyond Dekas is Ellinika, and then Mavrospilia. 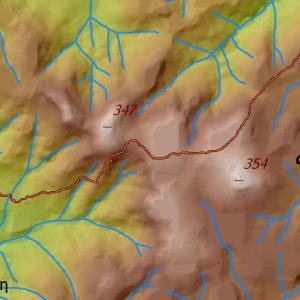 more
Close
Giving directions for this walk is more difficult, so we suggest you take a compass. From where the boat lands you at Epano Mirsini, you follow the green arrows.You pass behind an old stone hut and begin the ascent with the ravine that comes from Kato Mirsini on your right. Climb to the top of the ravine and then follow the ridge to the East. Skirt the highest point of the island, leaving it on your right and begin to descend the  ridge bearing to the north-east. If  you have the time and the energy, a detour to the summmit  is not difficult.

As you continue, the path becomes clearer  and you climb to the trigonometrical point ( a small pillar) which you will see in front of you. As appears from the map, the descent to the lighthouse is from the northern side of the bay.

The sea appears splendid from above and  a plunge in the sea is a must in the summer. If by mistake you find yourself on the south side of the bay, (on the right-hand side as you face the sea) do  not  attempt to climb down, but  turn back again to the path.